How did She Makes Film get started?

An idea landed in Jenna’s brain one day: to create a platform to make and share films. She told Hannah, having worked previously with her on three short films, and then two weeks later Cara came on.  Our first project together was Black Oaks, which was quickly followed by the next two installments in the Visual Poetry Project.  We first wanted to explore a visual language, and were all moved by great music, poetry, and nature.  Because we decided to crew these films with only the three of us, we chose easier ideas to execute – filming M.O.S. and adding sound in later.

Tell us a little about yourself as individuals & what role you play?

Jenna: I have two degrees: a BFA in dance performance and a BA in Spanish. I’ve danced professionally for ten years and am a stickler for the choice and precision of music in film.  I was tired, as an artist, of waiting for “permission” to make things, waiting for the booking, and seeing the kinds of breakdowns I was getting for my type (“If I see ONE MORE ‘hot blonde in bar’ breakdown I’m going to punch someone). I knew we needed to create the things we wanted to see in the world.

Cara: I have a BA in theatre performance and have studied many different acting methods.  Theater was my first love, but realized what that meant is an immense passion for telling stories.  I have produced for stage and film – organizing shows for non-profit theatre, producing my own films.  Working with SMF has allowed me to explore so many other passions: lighting design, assistant directing, story consulting, the list goes on.  I’m still an actor first and foremost; most recently I had the joy of acting in season two of The Man In the High Castle on Amazon.

Hannah: Starting college as Pre-Med, I shocked myself when I came out with a BA in Dramatic Arts. However, I appreciate my college years for introducing me to the most amazing film studies classes. Having performed in Operas and Theatre since I was three, I naturally leaned towards storytelling, but it wasn’t until I found directing, that the analytic and artistic sides of myself came together. I have always let my passion lead the way, and about 5 years ago, I wrote and directed my first short film, Impossibilities. I was so lucky that this led me to a lot of great people who started believing in me.  All the opportunities that are in front of me now, are a direct result of finding my team with Jenna Keiper and Cara Mitsuko.

Roles: We all orbit in and out of roles – making sure that equal artistic stake is given whenever we produce something together.  We have learned that this is imperative whenever working for free.  We try to honor what our members are most passionate about – ideas, story consulting, lighting, sound, directing, acting, etc.

How big is your production team (and who does that include)? How did you go about finding your team?
Our production team is comprised of the three founding members of SheMakesFilm: Hannah Kean, Jenna Keiper, and Cara Mitsuko.  We had all met in an acting class in North Hollywood (Stuart Rogers’ Studios) and “clicked,” but it took a few years for us to start working together.  Cara had just returned from a year in Portland, and Hannah and Jenna had worked on three films together when we collaborated our first SheMakesFilm project.  It was when all three of us came together that some kind of magic took place.

You have six shorts and 2 documentaries under your belt. You are currently working on your first featured film. Tell us a little about the featured film.
A feature has been on our docket for about a year now.  Initially it started out as a film highlighting the intersection between a person’s curated social media image and the reality of their personal identity.  About three months ago the team sat down and realized that we’d all changed as artist and that the feature had to change too.  Cara told writer/director Hannah to just write the story that she wanted to write.  A week later Hannah had her first draft.  Speak Hands For Me tells the story of a female veteran, newly out of the forces, who finds a new sense of identity in the mayhem of the theatre. 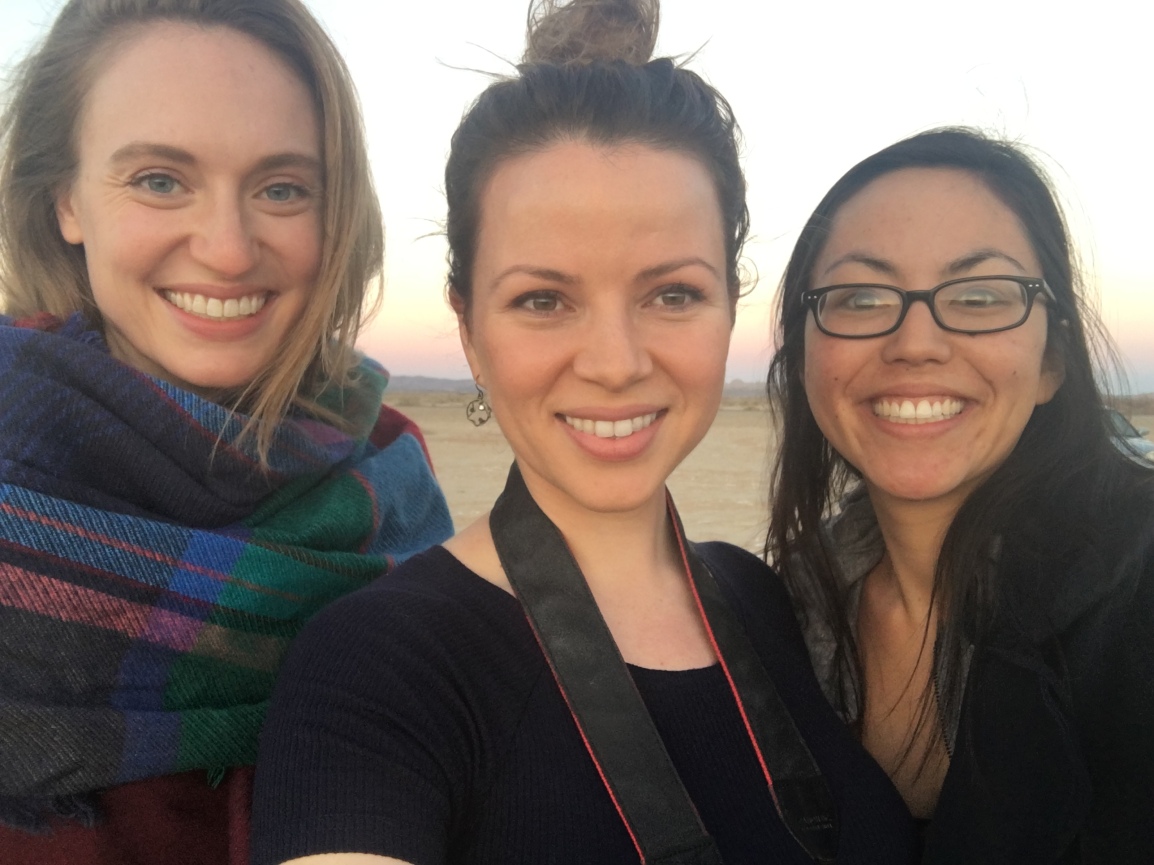 What resources do you use to find your actors?
We have a vast list of incredible performing artists we know from past projects and Stuart Rogers’ Studios that we enjoy including in projects because we believe in their talent.  However we are working on reaching outside of our network – sometimes sending out casting notices or asking for referrals as in the case of Harriet Tubman: Journey to Freedom.

Many of the women filmmakers that follow our collective are in the beginning or the middle stages as far as filmmaking. What is one lesson you learned when first starting off in the filmmaking world?
J: Fear of failure will cripple you. Take the risk that what you create will not be what you imagined when you started – it might even be something better.
H: If you cannot find joy in your process, you have failed before you’ve even begun.
C: When we start we have lots of ideas that in a few years we may think are bad – don’t let that stop you; love all your babies and be precious with none of them.

Why did you all decide to pursue independent filmmaking?
There are stories within us that need to be heard – stories with diverse casts and complicated, beautiful women.  We also realized that we couldn’t demand that the industry do better if we weren’t making our own art. We decided we didn’t need or want to wait for permission – for the perfect camera or the perfect skill level or even a budget at ALL. We started with an iPhone and a crew of three people!

What does a typical day look like for you while in full production for this project?
We alternate between team members’ homes – starting our day early and setting up our mobile offices.  We generally start with a check-in: hearing from each member what they’re planning for the day and what they would like help with.  Next we game plan our daily schedule – when do we work together? when do we work separately?  We try to organize our days to allow for equal artistic and administrative tasks.  We don’t always achieve this balance, but we are a happier team when we do.

How do you recommend that filmmakers break in?
Create your own work, and start volunteering on sets.  You have to start exercising your artistic muscles, and the best way to ensure that you’ll be able to call on people to help you out, is to be helping them right now.

Cost is always a factor how do you fund “green light” projects?
You tell us! Haha, but in all honesty we’ve often funded from our own pocket.  Any money we’ve gotten from filming reels for actors, the Harriet Tubman concert sales, etc. has been used to buy equipment for SMF.  None of it as this point goes into our pockets.  We film as cheaply and effectively as possible, and this restriction often leads to great creativity.  We have incredibly talented and generous filmmaking friends who have donated their time, and we donate time around town on other sets as well.  So perhaps we’d say: help other filmmakers.  That’s the easiest way to get them to pay you back with favors.  Take people out to coffee, find like-minded artists.  These are the people you will lean on as you start making films.  Our feature film is the first time we are learning the process of engaging sponsors and investors.  It’s a grueling process, but has been very rewarding.

What is your social media strategy as business owners but also finding that balance as a creative?
This is an excellent question, and one we still struggle with.  We give ourselves a limit – each of us spends a certain amount of time a day on different social media tasks.  We’ve found that a lot of time spend on social media can kill our momentum and creative minds.  It takes a lot of energy.  Once a week we all sit down and plan out the week on Instagram in photos and captions.  We’ll switch off who writes what; often one team member will write the caption for another, since we still have a little trouble bragging about ourselves on social media.  We try to post things that inspire us.

What legacy do you want She Makes Film to leave behind?
Stories that move us forward as a society – that help us expand our minds.  We aim to move the line forward – the line of what is acceptable, what is society.  Trying to better reflect in cinema our diverse and changing world.  We miss seeing movies that remind us of our humanity and our heart.  The basis for all the good movies of the past is a real human story.

Where do you see She Makes Film headed in the future?
We want to be able to support ourselves as artists, and other women as well.  We have a full roster of films for the next year, and hope to continue learning from and meeting new artists.

What’s next for you as individuals?
Jenna starts a master’s degree this fall in Anthropology and Documentary Film. She will head up the documentary branch of SheMakesFilm and will be acting in SheMakesFilm’s first feature.
Hannah will write and direct her first feature and continue to work on her two additional feature screenplays.
Cara will also be acting in SMF’s first feature and continues to pursue acting with the help of her amazing agent and manager team.  She will also be directing her first short film – a collaboration between SMF and her husband, Chris Sutherland at EOD Films.

One thought on “Interview with She Makes Film”